How politics became our identity 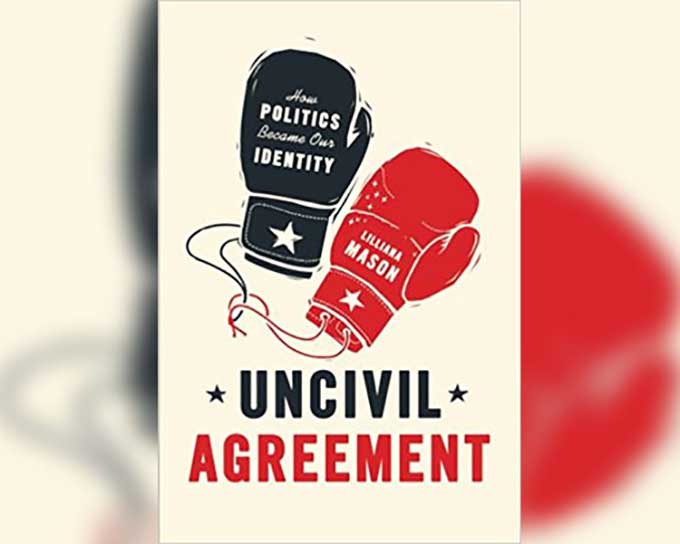 Dinner parties used to be where you avoided politics. Now talking about politics at dinner parties is the norm.

Years ago, we avoided politics because we assumed the people at our table had diverse political identities, and we didn’t want to introduce a topic that might lead to an argument. Today, we assume our guests share a single identity, after all, why else would we have invited them?

Something has changed in the United States, and for many of us, it’s only at Thanksgiving dinner, a gathering where we don’t get to sort ourselves by political tribe, that we must face people who see the world differently than ourselves.

In this episode, we spend time with political scientist Lilliana Mason who discusses this in her new book, Uncivil Agreement, in which she says we actually agree about most things, and strangely, “our conflicts are over who we think we are, rather than reasoned differences of opinion.”

As Mason explains, “Our opinions can be very fluid, so fluid that if we wanted to come to a compromise we could, if there were not these pesky identities in the way. We can’t come to a compromise because our identities are making us want to take positions as far away from the other side as possible. What that means is that we are trying to look like we disagree in order to defend our identity and our sense of difference from other people.”

As an example, Mason says that six months ago 99 percent of Americans would have said that, of course, children should not be separated from their parents. Now that the issue is politicized, people claim to feel differently, but in reality, it’s only tribal signaling at play. If their party were to ask them to express their true feelings, they would. They’ve become trapped by tribe.

“Our actual opinions, our levels of agreement, are different than what we are willing to accept our government to do because we don’t want to feel like our party is losing,” explains Mason in the show.

Lilliana Mason is professor of Government and Politics at the University of Maryland where she researches partisan identity, partisan bias, social sorting, and American social polarization. She is the author of Uncivil Agreement: How Politics Became Our Identity, and her work has been featured in the New York Times, the Washington Post, CNN, and National Public Radio.

Her book outlines how we’ve moved away from issue-based polarization and entered a new realm of identity-based polarization. As long as the identity divide is maintained, we will behave more like warring tribes than a unified nation of people who have different values and ideas about what policies should be enacted.

According to Mason, “Right now, we’re telling ourselves a story about a war that’s going on in our country, and it’s only making the war worse.”

Support the show by becoming a patron! Get episodes one-day-early and ad-free. Head over to the YANSS Patreon Page for more details. You can also support the show through PayPal by clicking this link.

The Daily Mail, a UK tabloid, ran a story accusing British athlete James Cracknell of breaking social distancing rules in a visit with his parents. It illustrated this with the above photograph, showing Cracknell sat inches from his father. The Daily Mail, however, fabricated this image by photoshopping what Cracknell actually posted, below. The real […]

Over the weekend, Trump railed about journalists on Twitter in a typo-strewn rant in which he repeatedly confused the Pulitzer Prize with the Nobel Prize (which lacks a journalism category) and spelled Nobel “Noble” throughout. Trump (or a handler) has deleted the tweets, but they live on in the archives.

Help save the USPS with this Dog Mail Carrier Costume

You probably heard that the U.S. Postal Service is tanking, expecting to run out of money by October 2020. Interestingly, it’s not funded by taxpayers, but entirely through the sale of postage, gifts, and services. So, now there’s a growing movement to help save them by purchasing postage stamps and other products from their online […]

Too few are checking their car insurance rates. This site can help you save serious money.

When you were 10 and your mom demanded you finish your vegetables or go to your room, you were mad. Even as kids, we hated it when we were ordered to do something. Car insurance is a federal mandate, yet that’s only one of the reasons why most Americans would rather do just about anything […]

It’s never too late to learn Excel. So learn it from the firm that teaches Microsoft workers.

The mark of true greatness in tech is longevity. Because if you’ve survived more than an 18-month product cycle and endured…well, you’re one of the lucky few. That’s part of why the continuing devotion and market dominance of Microsoft Excel is such a historic story. Today, 35 years after its introduction, this spreadsheet titan is […]

From national and local news anchors to Ellen Degeneres, from Saturday Night Live to the all-star Together At Home concert, we’re learning another new reality of our 2020 entertainment world: everyone has their own home production equipment these days. Granted, it’s often just an iPhone, a mic and some extra lighting, but the shuttering of […]

Patrick Mouratoglou: 50% of UTS audience were previously not watching tennis

Oxford University scientists leading the global search for a coronavirus vaccine are to recruit “very healthy” over-55s to help with clinical trials. The next phase of testing will focus on how older adults’ immune systems respond, the Oxford vaccine group said on Friday. Scientists are looking for 10,260 people from across the UK to take…

The government borrowed a record amount in April, adding £62.1bn to the country’s budget deficit.The Office for National Statistics said government borrowing was £51.1bn higher than the same month last year. It comes amid efforts by Chancellor Rishi Sunak to prevent mass job losses from the coronavirus pandemic by furloughing many of the country’s workers.…

The American political conflict – ever more contentious, more complex, more constitutional in nature in the Donald Trump era – is now entering a new, uncharted phase. By declaring an emergency to use money Congress didn’t appropriate to undertake border-wall construction Congress didn’t approve, Mr. Trump escalated the Washington struggle from a series of cold…

The COVID-19 pandemic has brought the sports world to a standstill in recent weeks.Nearly every sporting event in the country, and the rest of the world, has been canceled or postponed because of the coronavirus.[ Coronavirus: How the sports world is responding to the pandemic ]Even the 2020 Olympics, which were scheduled to start on…

Oklahoma State University football coach Mike Gundy earlier this week said he thought his entire program could return to the Stillwater campus by May 1. He said healthy athletes could fight the virus, and anybody sick would be quarantined as if they had the flu.On Saturday, Gundy backtracked and apologized.”I have been made aware that…

Farce as banks give coronavirus crisis loans to just 5,000 businesses

Banks have given vital coronavirus crisis loans to just 5,000 small British businesses during the coronavirus crisis.Of 300,000 enquiries about the Government’s Coronavirus Business Interruption Loan Scheme (CIBLS), fewer than one in 60 resulted in cash handouts.The scheme – announced by Chancellor Rishi Sunak last month – encourages banks to lend to struggling small businesses as the…

“Coronavirus will not overcome us”: Queen Elizabeth offers words of hope in first-ever Easter message

Easter weekend is usually filled with large gatherings at church, easter egg hunts and families coming together, but coronavirus has changed the traditional celebrations as people continue to isolate themselves indoors. Now, for the first time in her 68 years as Queen of the United Kingdom, Queen Elizabeth II has released an Easter message, sending…

Can the coronavirus be spread through farts?

April 20, 2020 | 3:49pm | Updated April 20, 2020 | 4:47pm The smell may be hell but the mist could leave you pissed. Two Australian doctors are weighing in about the spread of the coronavirus “down under” — whether it can be spread through farts, that is. During Friday’s episode of the Australian Broadcasting…

Dolly Parton is encouraging her fans to celebrate Easter regardless of their current circumstances.Parton shared a video on social media on Sunday to wish her followers a happy Easter and to share a special message.DOLLY PARTON SINGS TRIBUTE TO KENNY ROGERS WHILE SELF-ISOLATING FROM THE CORONAVIRUS”Happy Easter, everybody. A little different this year, huh?” the 74-year-old…

Get the latest from TODAYNick Cordero’s wife says the Broadway star has encountered a new obstacle as he continues to remain hospitalized with the coronavirus.”Just a little Nick update, it’s been a tough week,” Amanda Kloots said on her Instagram stories Saturday night. “Nick suffered from some new lung infection in his lungs earlier this…

Disney Plus: Everything to know about Disney’s service during coronavirus

Disney Plus, the entertainment giant’s online hub to stream almost everything it produces, has grown into a megahit, and its popularity that has continued during the  coronavirus  pandemic. Disney Plus streams shows and movies from Disney’s franchises including Star Wars, Marvel and Pixar, and all the family-friendly movies and animation from Disney itself, plus new originals…