When San Francisco’s bars and clubs reopen, The Stud, the city’s oldest, continuously operated queer bar, may be among them — but not in its longtime, kitsch-cluttered home at 399 Ninth St.

The collective that operates the club announced late Wednesday that members have decided to shutter the current location at Ninth and Harrison streets in SoMa, the bar’s home since 1987. Honey Mahogany, one of the co-op members, confirmed for The Chronicle that they still planned to look for a new home for the 54-year-old bar.

In the meantime, they plan to continue their online operations, which include a queer history podcast and weekly online drag showcase.

“The Stud, the nightlife entity, is not dead,” wrote another co-owner, Marke B., on the alternative S.F. news site 48 Hills. “We’re still going to come back when this is over — a different space with the same lovingly outrageous vibe.”

The move itself is not entirely surprising. The bar almost closed in 2016 due to a rent increase but was saved by a group of patrons who rallied and reworked the Stud as a cooperative. That collective has been on the lookout for a new spot for almost as long as they have had ownership of the space. The bar’s rent has been prohibitively expensive for years. When Michael McElhaney, the previous owner, put it up for sale then, he said the rent was $3,800 a month. 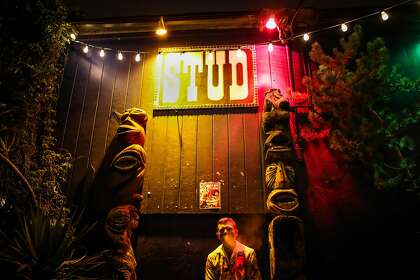 Among the city’s many gay bars, the Stud has long had a reputation as a home for an alternative queer scene, one that is deliberately open to all.

“On any given night you’ll see men in leather, punks with pink hair and even women,” read a 1980 article in Drummer magazine. “But the mix works fabulously and the Stud remains one of the dominant dance bars in a city famous for its discos and clubs.”

Etta James performed there; Sylvester, Bjork, Lady Gaga and RuPaul too. Through the years, the Stud’s stage has been home to a wide range of experimental music and performance. And more recently, after the collective took control of the bar, it seemed to enter a new renaissance.

The Stud proved it could survive a move when it moved from its original location on Folsom Street in 1987, and it has no shortage of local political support. Both state Sen. Scott Wiener and city Supervisor Matt Haney are planning to attend the Stud’s news conference set for 2 p.m. Thursday, during which the bar’s owners plan to map out the Stud’s future.

A “drag funeral” to “honor the end of an era of LGBT nightlife” is scheduled for May 31.

When you subscribe we will use the information you provide to send you these newsletters. Sometimes they’ll include recommendations for other related newsletters or services we offer. OurPrivacy Noticeexplains more about how we use your data, and your rights. You can unsubscribe at any time.Invalid EmailMore cases of coronavirus have been confirmed across Somerset as…

Taylor Swift just called out Scooter Braun and her old record label for “shameless greed” during the coronavirus (COVID-19) outbreak. Braun bought Big Machine Label Group from Scott Borchetta, acquiring the masters to Swift’s first six albums. According to Swift, the label plans to release an album of a live performance of hers without her…

How to follow the 2018 midterms without losing your sanity

After all the huffing, puffing, canvassing, and hand-wringing, the 2018 midterm elections are nearly here. Now it’s time to hunker down and prep for election night, leaving just one question: how can we make it through our first post-Trump national election without losing our sanity? We’re still suffering from New York Times needle-related flashbacks thanks…

Captain America just put the president of America in his place, so that’s where we’re at

Captain America to the rescue! Image: mashable composite: marvel and MIKHAIL SVETLOV/GETTY IMAGES By Nicole Gallucci2018-07-16 21:39:16 UTC America could use a hero right about now, and Chris Evans (aka, Captain America) seems up for the job. On Monday, Donald Trump held a joint press conference with Vladimir Putin in Helsinki, Finland. He — the US…

5 die from coronavirus after attending Indiana high school basketball tournament with 2,800 others

Five men who attended an Indiana high school basketball tournament in March have died after contracting coronavirus, and at least a dozen others fell ill following the four-game bonanza.Jim DeSalle, Paul Loggan, Larry Rush, Roscoe Taylor III and Charles Johnson have all passed away in recent weeks following their attendance at a March 6 game…

Britain’s energy suppliers are continuing to use debt collectors to chase unpaid bills after promising to help households during the coronavirus pandemic by offering payment plans to struggling customers. Under an agreement with the government, energy suppliers are expected to identify customers who might be in financial distress and offer to reassess, reduce or pause…

How The Simpsons predicted ‘murder hornets’ and the coronavirus pandemic

The Simpsons predicted a kind of coronavirus way back in 1993. Video screenshot by Bonnie Burton/CNET For the most up-to-date news and information about the coronavirus pandemic, visit the WHO website. Whether or not you believe The Simpsons animated TV series is still funny, during its 30 years on air, one thing is for certain:…

Image copyright Getty Images Image caption Amazon’s warehouses have been the sites of friction between employees and the retail giant Amazon has installed thermal cameras in its warehouses in the UK and around the world to screen workers for coronavirus symptoms. The cameras can help detect a fever by comparing a person’s body heat with…

4:59 PM ETAdrian WojnarowskiSenior NBA Insider CloseHost of The Woj Pod Joined ESPN in 2017As the uncertainty grows, and scientific, economic and competitive elements collide, there’s one constant in the struggle to revive the NBA: Owners and players are delivering Adam Silver full room to operate, govern and make the decision on resuming play amid…

A UK government warning is seen at a bus stop in London. Photograph: Kevin Coombs/Reuters The London mayor, Sadiq Khan, has said he is “absolutely devastated” after five bus workers in the capital died after testing positive for Covid-19. Khan tweeted that “lives depended” on people following government rules to stay at home unless travel…

Turkey’s president, Recep Tayyip Erdogan, defied the pundits by winning an outright re-election victory in the first round of voting. His Justice and Development (AK) party, together with its allies, also triumphed in simultaneous elections to parliament. The elections marked a rise in nationalist sentiment. In his victory speech Mr Erdogan said the country had…

Andrew Lloyd Webber is to stream a production of one of his musicals for free on YouTube each week during the coronavirus crisis. Lloyd Webber’s YouTube initiative to entertain fans, titled “The Shows Must Go On!,” will begin with his 2000 adaptation of “Joseph and the Amazing Technicolor Dreamcoat,” starring Donny Osmond, Joan Collins and…

Coronavirus UK: Staycations could return as early as July

Holidays within the UK could be back on the cards from the beginning July as the country lifts its coronavirus lockdown. Speaking at today’s Downing Street press conference, Culture Secretary Oliver Dowden said he would ‘love to get the tourism sector up as quickly as we possibly can.’ British campsites have already been experiencing a…